I Let the Water Take Me :: a Little Mermaid fanmix 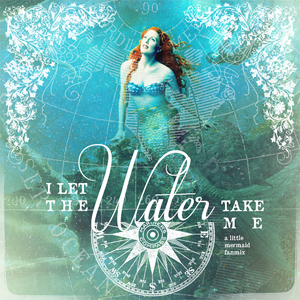 I said there were more coming, and I wasn't lying! I present the third of my fairy tale mixes -- The Little Mermaid! I tried to make this very nautical sounding, and in the end a little haunting as well. It's such a lovely, heartbreaking story, and I tried my best to catch it's essence. 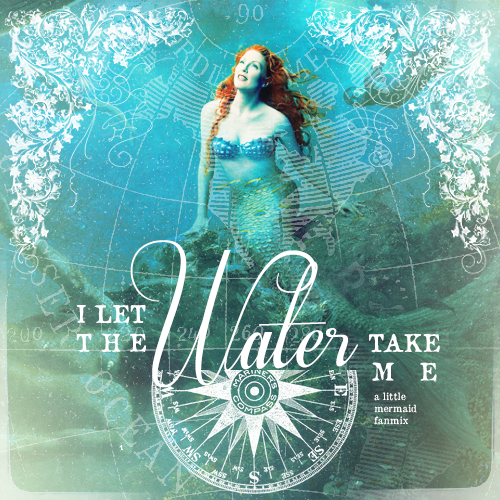 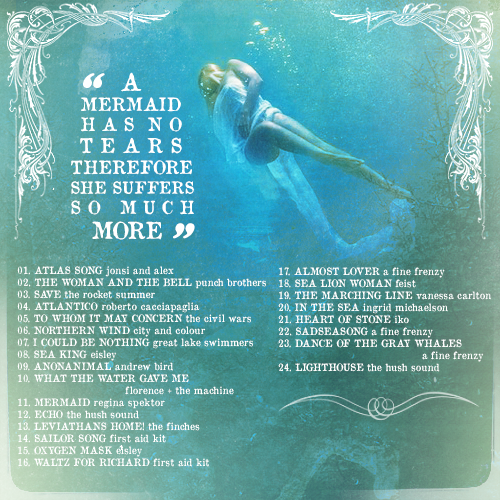 A very nautical sounding instrumental piece to start the story. I like to imagine this is the song the mermaids are playing and what the Prince and his sailors hear on their voyage.

The Woman and the Bell - Punch Brothers
"I know my ship, my catch, and my men."
"And I know what you think you've seen,
Captain, you may well take offense,
But something has to be done nonetheless
Or it's off to Davy's Locker for to calm the sea.

The Prince hears the voice of a woman, and despite that there have been signs of a storm coming, he insists on his sailors to follow the voice.

The storm takes the ship, but the Little Mermaid saves the Prince. She leaves quickly after saving him.

The score of the shipwreck and The Little Mermaid saving and singing to him.

To Whom it May Concern - The Civil Wars
Slowly counting down the days
Till I finally know your name
The way your hand feels round my waist
The way you laugh, the way your kisses taste

Dear whoever you might be
I'm still waiting patiently

The Little Mermaid and the Prince both long for each other, but neither know who the other is.

Oh my love
If I could just find you tonight

The Prince spends his time thinking about the woman who saved him, and all he wishes to do is to find her. He decides to head back out to sea, this time in search to find her and make her his bride.

Sea King - Eisley
I'm going away, I can't stay
And I pray he finds out someday...

Sea King, Sea king
Can't you see that you're so silly?
Sea King, I know things
And without love you won't get far

Her father disapproves greatly of her love for a human, but she has decided she cannot be apart from the Prince and has decided to become ~part of his word~ ok i'm done that was my only disney reference let's continue

The Little Mermaid seeks out the sea witch to turn her into a human. The sea witch's methods can be cruel and manipulative.

What the Water Gave Me - Florence + the Machine
‘Cause she’s a cruel mistress
And a bargain must be made
But oh, my love, don’t forget me
I let the water take me

The Little Mermaid trades her tongue human legs. She can no longer speak, and when she walks it feels as if she's walking on knives.

Echo, my voice is an echo
of places I don't know
and stories I've told

The Little Mermaid knows that she is the woman the Prince is thinking of, but he is not able to remember her by appearance, only by voice, which she no longer has.

Leviathans Home! - The Finches
Watch the sun slide under the ocean
Feel the sands stay warm for a while
You can hold my smile
You can press my palm
You can be my leviathan
I will be your leviathan

Even though the Prince does not believe her to be the woman who saved him, both he and The Little Mermaid have fallen in love with each other.

The Prince's men have tracked down the woman they believe saved him. They sail to land in another boat come the next morning, but although the Prince has agreed to meet her, it is only but to thank her. He kisses the Little Mermaid and tells her it is she he'll make his bride when he comes back.

Oxygen Mask - Eisley
And all the poetry convinces me
You were stolen from the waves at sea
But now we are crumbling
And I'll never get the chance to say what it means
To have you, my love, depend on me
To live all those days so joyfully

When the Prince returns, he has gone back on his word and has decided to marry the woman he had just met, only now loving The Little Mermaid as a dear friend. A wedding is being planned, and The Little Mermaid is left heartbroken.

Almost Lover - A Fine Frenzy
And when you left you kissed my lips
You told me you'd never ever forget these images, no

Goodbye my almost lover
Goodbye my hopeless dream
I'm trying not to think about you
Can't you just let me be?
Goodbye my luckless romance
My back is turned on you
Should've known you would bring me heartache
Almost lovers always do

The sea witch gave the Little Mermaid a knife to plunge into the heart of the Prince so that she may return to her mermaid form and rejoin her family in the sea.

Marching Line - Vanessa Carlton
Take back your list
You don't know what love is like; a bullet in the chest

In the Sea - Ingrid Michaelson
I feel it in my skin, I feel it through my bones
Your fingertips are falling far from where I know
I try to pin you down but you move like a dream
I want to find you but you dropped me in the sea

The Little Mermaid cannot kill the Prince. She throws the knife into the water, looks back once more at the prince, and then throws herself into the sea along with it.

Dance of the Gray Whales - A Fine Frenzy
(Instrumental)

"The sun rose above the waves, and his warm rays fell on the cold foam of the little mermaid, who did not feel as if she were dying. She saw the bright sun, and all around her floated hundreds of transparent beautiful beings; she could see through them the white sails of the ship, and the red clouds in the sky; their speech was melodious, but too ethereal to be heard by mortal ears, as they were also unseen by mortal eyes. The little mermaid perceived that she had a body like theirs, and that she continued to rise higher and higher out of the foam."

Lighthouse - The Hush Sound
There is a girl who haunts that lighthouse
She saved me, I was swimming
So young I almost drowned
Under the water she sang a story
Of losing her lover
She calls a warning


.zip
All songs and cover art are included in the zip.
If you like what you hear, please take a peek through the 'monthly mix' or 'fanmix' tag for more music!

Listen to the mix on 8tracks! 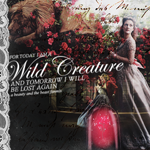 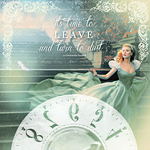 
The RIAA dictates that all music downloaded should be removed after a preview period of twenty-four hours. What you do with it after that is your own responsibility.</center>